Our sister site Computer Sweden has just published an interview with Xkcd comic author and artist Randall Munroe. As we're not sure how much of our audience reads Swedish – we don't apart from our local IDG News Service correspondent Mikael Ricknäs – here's it translated into English.

You might not recognize Randall Munroe's name, but you've most certainly seen his stick figures. Ever since he published his first strip in 2005, the strips have been frequently shared on the internet, and they're also used for spicing up Powerpoint presentations.

His popularity means that Randall Munroe can live on his comics without having to sell advertising. He makes money from selling T-shirts.

When Computer Sweden meets him in Malmö, Sweden, he's attending the developer conference Øredev where he's giving a lecture about the April Fool's jokes he runs on his site.

XKCD fits the Øredev audience as a glove. Many of the comics are about subjects such as cryptography, the Internet, Python programming and SQL. Randall Munroe does have a background as a programmer, even though brief. After graduating, he was hired for a NASA project where he worked with robots. His most memorable contribution, however, seems to have hitched a robot to his office chair with a network cable and have it pull him around. And about the same time he found out that he made more money selling funny t-shirts than being hired by the federal space program. 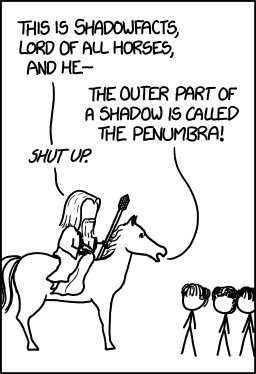 JR: What made you start drawing XKCD?

"Actually, it started by accident. I've always spent a lot of time making charts, solving math problems and doing other things in the margins of my school notebooks. Instead of doing what I was supposed to do, I drew maps and stick figure battles. Every time I had to hand in an assignment, I didn't want to, because I had made something that I wanted to keep. Eventually, I realized I spent so much time in the margins that I needed to get my own notebooks for that."

JR: Were those drawings in the margins about what you were studying?

"No, that would have been nice, but no, but they were usually about something quite different. I was an OK student, not a great student. In the end, those notes started to stack up faster than my school books.

JR: When was this?

"I began keeping my own notebooks in high school, but it wasn't until near the end of university that my piles of notebooks became so high that I had to decide what to keep. I browsed through some of it and scanned it, and some of the scanned stuff was kind of neat, sort if in themselves, so I published them on a web site that I owned and hadn't used for anything. I'd bought a four-letter domain."

JR: So you had the name before the comic?

"Yes, and I picked the name XKCD because I wanted a unambiguous string of text that referred back to me. Even when I was eight or nine years old, I had noticed that all services I used on my computer made me select a name when I signed them. And every time my interests changed, I changed the name that I used. Finally, I thought I should have a name that just referred to me. I didn't want a name that meant anything, because then I wouldn't have to change names when my interests changed. However, that didn't help me escape that trap. My alias became associated with my web site, so I had to stop using it for other services, because people thought it referred to the comic.

JR: And before starting your comic, you worked with robots at NASA?

"I first had an internship there in the summer of 2005 and worked on a virtual reality display. At the end of that, I was offered a job in one of NASA's robotic labs. That was when I started to publish images from my notebooks on my site. Interest in the comic grew quite rapidly, so I offered some t-shirts for sale in Spring, 2006. I think I sold 15, five of them to my mum."

"At the same time, I published a comic about the sudo command in Linux that people really liked. Until then, I hadn't realized that there was a whole community of programmers out there that really liked my stuff. So I put a t-shirt with that joke on the net, and it sold really well, and I realized that I wouldn't be able to go to work and mail all those t-shirts at the same time. Before I knew it, I made more money on t-shirts than on my day job. Every day when I went to work, I was losing money."